Habitat for Jaguars in the United States Protected 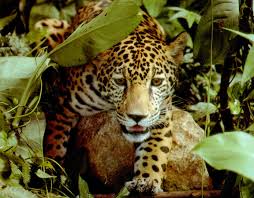 Washington, DC – The U.S. Fish and Wildlife Service at last protected habitat deemed essential for the survival and recovery of the jaguar in the United States. The long-awaited rule designates 764,207 acres in Arizona and New Mexico as “critical habitat” for the imperiled cat. The jaguar was listed as “endangered” under the Endangered Species Act (ESA) throughout its range in 1972, and listed explicitly in the United States in 1997.

Historically, jaguars may have occurred as far north as Grand Canyon, Arizona. However, no documented females or breeding pairs have occurred in the United States for over fifty years.  In the past several years, male jaguars have appeared in the U.S., including one currently residing in the Santa Rita Mountains of Arizona. The large, beautiful cats are sometimes seen within forty miles of the Mexican border, but are rare visitors to the U.S.

“The habitat protections finalized today will help ensure that jaguars may once again safely roam the wilds of Arizona and New Mexico,” said Taylor Jones, Endangered Species Advocate for WildEarth Guardians. “We call on the Service to quickly take the next steps to ensure a self-sustaining jaguar population is reestablished in the U.S.”

Critical habitat designations protect a geographic area that contains features essential to the conservation of a threatened or endangered species. Those features include food and water resources, breeding habitat, travel corridors, or other resources essential to the life history of an animal or plant. For jaguars, these features include populations of prey animals, water sources, and rugged mountain ranges. Federal agencies must consult with the Service before undertaking any projects that might adversely affect or destroy critical habitat. Protected habitat in the U.S. will allow jaguars to naturally disperse into their former range from the nearest core population in Mexico.  It will also provide a buffer against the impacts of climate change, which may cause jaguar populations to shift northward.

2 thoughts on “Jaguar Habitat Protected in U. S.”