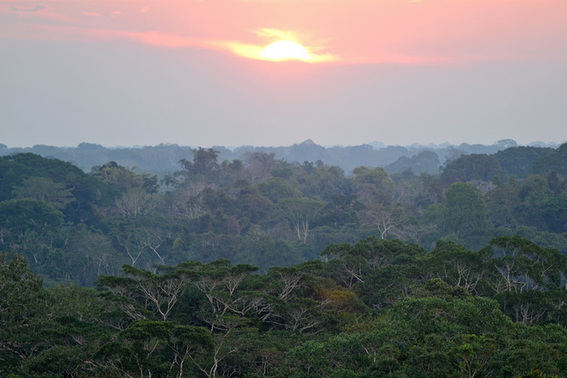 “Tropical forests are being exposed to unprecedented environmental change, with huge knock-on effects. In the past decade, the carbon absorbed annually by the Amazon rain forest has declined by almost a third.

“At 6m km2, the Amazon forest covers an area 25 times that of the UK, and spans large parts of nine countries. The region contains a fifth of all species on earth, including more than 15,000 types of tree. Its 300 billion trees store 20% of all the carbon in the Earth’s biomass, and each year they actively cycle 18 billion tonnes of carbon, twice as much as is emitted by all the fossil fuels burnt in the world.

“The Amazon Basin is also a hydrological powerhouse. Water vapour from the forest nurtures agriculture to the south, including the biofuel crops which power many of Brazil’s cars and the soybeans which feed increasing numbers of people (and cows) across the planet.

“What happens to the Amazon thus matters to the world. As we describe in research published in Nature, the biomass dynamics of apparently intact forests of the Amazon have been changing for decades now with important consequences.”

Sourced through Scoop.it from: climatechangepsychology.blogspot.com

1 thought on “Climate Change: The Next Generation: Amazon carbon sink is in decline as trees die off faster”