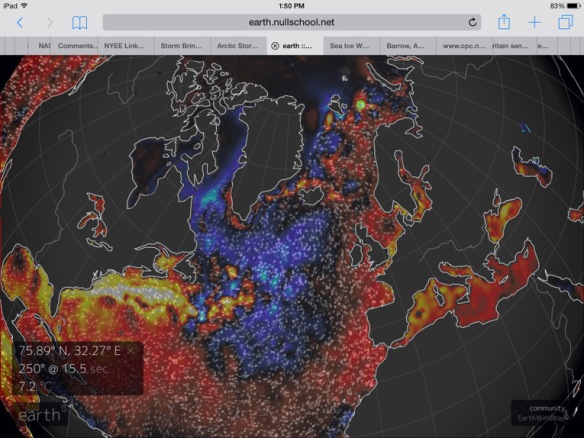 But it is in the North Atlantic that the influences of human-forced climate change upon the weather are starting grow most starkly clear. There the impact of El Nino is far less obvious. During a typical strong El Nino year, storms tend to form more-so over Iceland. And we’ve seen that. But in the past, El Nino years have also tended to bring colder weather to Scandinavia as the Northern Hemisphere Jet Stream strengthened and locked cold air into the higher Latitudes. However, this year, as in recent years, the Barents Sea has been freakishly warm. This region, which during the 20th Century featured much more sea ice than today, is now mostly ice free. And this broad section of open water vents heat into the atmosphere, warming Scandinavia and providing a weakness in the Jet Stream for warm air invasions of the Arctic.

“Today The New York Times is calling it Climate Chaos, The Washington Post — Freakish Weather. But what we are really seeing is the start of the extreme climate disruption experts and scientists have been warning us about all along. A disruption resulting from a severe warming of the globe’s atmosphere, oceans, and ice. One that some tried to deny was happening at all but that is now, as likely as not, wreaking havok in their own hometowns. Given the dismal state of affairs, one has to honestly ask the question — why didn’t we listen? Why didn’t we act early to stop this horrendous mess? And following this question, an assertion — we would be insane to not work as hard as we can to prevent this abysmal situation from further worsening.”  From: robertscribbler.com

GR:  Forecasters believe that next week California and the Southwest will begin to feel the impact of this El Nino on climate-change steroids.

2 thoughts on “Amidst Disasters Around the World, Top Scientists Declare Links Between Extreme Weather and Climate Change”