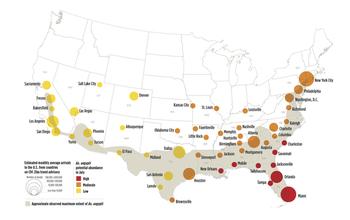 Climate and demographic factors could make parts of the southern U.S. vulnerable to the spread of the Zika virus.

Combing climate data with travel patterns, researchers with the Center for Disease Control and the National Center for Atmospheric Research say Zika virus outbreaks could occur as soon as this summer in parts of south Texas and Florida.

The study shows that the Aedes aegypti mosquito, which is spreading the virus in much of Latin America and the Caribbean, probably will become more abundant across much of the southern and eastern United States as the weather warms.

Summer weather conditions are favorable for the disease-carrying mosquito as far north as New York City and across the southern tier of the country as far west as Phoenix and Los Angeles, the models show.