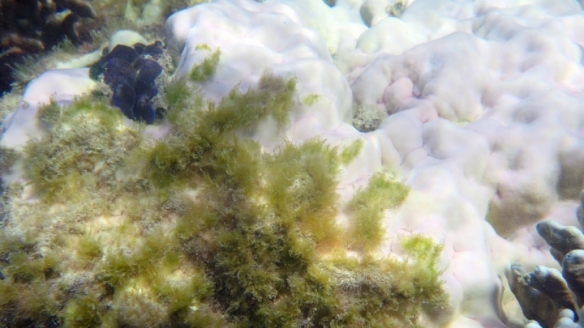 John Upton:  The colorless coral corpses of north Queensland will soon be blanketed with mats of algae, and the hard skeletons will begin to crumble. It may take decades for the submerged wonders of what had recently been unspoiled reefs to resprout and recover from the wipeout, if they ever do.

Temperatures continue to rise worldwide. The amount of heat-trapping pollution released every year from fuel burning and deforestation has plateaued in recent years, while the amount of pollution in the atmosphere continues to pile up. Bleaching is caused primarily by warm waters, and the current worldwide bleaching is the third and worst on record, all since the late 1990s.

The extent of the coral wipeout was particularly remarkable because it occurred inside one of the world’s best protected natural areas. Fishing restrictions and other rules are in place to protect reefs that serve as nurseries for large fisheries and as drawing cards for a tourism-heavy economy.

“The coral animal is the keystone species on a coral reef — like the trees in a forest,” Kline said. “When the corals die you lose the three-dimensional structure that’s really important. A lot of these fish, their larval stages depend on hiding in among the corals to hide from predators.”

Kline said the Great Barrier Reef is inside what’s considered to be “one of the best managed and most successful” marine parks in the world.