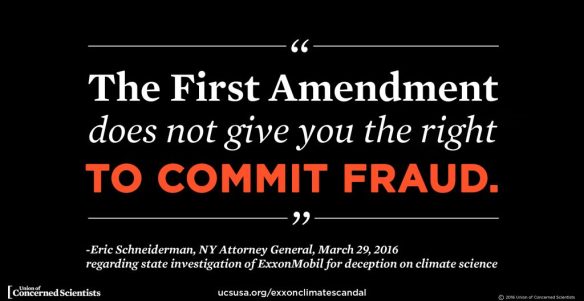 Gretchen Goldman, lead analyst, Center for Science and Democracy:  “. . . the New York Times printed a full-page advertisement sponsored by the Competitive Enterprise Institute (CEI), a free-market think tank that has been funded by ExxonMobil and has regularly misrepresented climate science. The ad reads in large font “Abuse of Power” followed by discussion of free speech rights of companies, nonprofits, and individuals to disagree on climate change. The ad claims that attorneys general in several states and the US Virgin Islands are overstepping their roles in investigating ExxonMobil for possible fraud.The ad raises the issue of abuse of power, so let’s talk about that.Abuse of power is when a company lies to its investors and the public about climate change impacts and engages on a decades-long campaign of spreading disinformation to the public and decision makers, despite being at the cutting edge of climate science research back in the 1960s. It’s not about ExxonMobil having first amendment rights (as it has claimed), it’s about whether or not the company has committed fraud. The ongoing investigations by attorneys general will determine the answer.

1 thought on “Abuse of Power: ExxonMobil, Chairman Lamar Smith, and the First Amendment – The Equation”