“Birds of Dewey-Humboldt, Arizona” is now available.  Click here for the book description.

This section could be titled “Some of The Birds.” The birds below are a sample of the 127 birds I’ve seen in Dewey-Humboldt. Note:  The photos are copyrighted.

American Robin (Turdus migratorius) With their bright early morning songs and tolerance for human neighbors, Robins are familiar to everyone. They love moist ground and lawns without pesticides. There you will often see the classic tug-of-war between a stretching earthworm and a straining bird. Robins like berries and gather around pyracantha and other shrubs in fall and winter. Description: Eight to eleven inches long, male and female similar, but male breast is deeper red. Robins have average life spans of six years. Nest: Female with help from male builds the nest in spring and lays four blue eggs two or three times during the year. Conservation: Easily poisoned by heavy pesticide use, and preyed upon by cats, hawks, and large snakes, Robins remain numerous and safe under current conditions. (Birds of Dewey-Humboldt, Arizona. GarryRogers.com. Photo: en:User:Mdf/CCSA).

Barn Owl (Tyto alba) Barn Owls are the most widely distributed of all owl species. They hunt small rodents, and never take anything as large as a house cat or dog. Barn Owls range from 10″ to 18″ in height. They can live for 25 years, but because of human impacts and natural predators, they rarely live more than two. If you have a Barn Owl living nearby, you have probably heard its “shreee” sound that’s nothing like the hoots of the Great Horned Owls or the toots of the Northern Pygmy Owls that we often hear in Dewey-Humboldt. Nest: Large tree cavity, barn loft, or house attic. Farmers often place nest boxes around their fields. Conservation: Cats and other owls prey upon barn Owls, and pesticides in the tissues of their prey poison them. Some farmers have stopped using pesticides, but most haven’t. The owls are endangered in seven stats, but not yet in Arizona. (Birds of Dewey-Humboldt, Arizona. GarryRogers.com. Photo: Female by Tony Hisgett).

Black-headed Grosbeak (Pheucticus melanocephalus) Black-headed Grosbeaks aren’t as large as Robins, but they are big enough to have trouble perching on bird feeders. Young birds flutter and flap as they learn to use the feeder. Grosbeaks eat berries and insects, but their large beaks are especially effective with seeds. The birds arrive in spring, build nests, and stay for the summer. They prefer a combination of large deciduous trees and lower shrubs. Their song is a rich warble similar to a robin’s but softer, sweeter, and faster. Nest: Female builds an open, loose nest in a shrub or tree and lays 2-5 eggs. Young birds leave the nest after 12-14 days but can’t fly for two weeks. They hang out on nearby branches and parents feed them. Conservation: Cats and hawks prey upon Grosbeaks, and pesticides in the tissues of their prey poison them. Wildlife biologists do not consider them endangered. (Birds of Dewey-Humboldt, Arizona. GarryRogers.com. Photo: Male by GR.)

Bridled Titmouse (Baeolophus wollweberi) ”Tit” is Old English for something small. Bridled Titmice may be small, but they are outstanding in other ways. They have unique facial markings, and they are among the most loquacious and the most human-tolerant of all the birds. They will trustingly take seed from your hand then fly to a nearby branch where they may surprise you with their jackhammer-like pecking that sends hull fragments flying. Titmice do not migrate though they wander about a bit in winter. They travel in small flocks that may include other bird species. Nest: Titmice lay four to eight white unmarked eggs in tree cavities and nest boxes. They appear to have mystery helpers at their nest that we have not identified. The birds can live more than six years. Conservation: Wildlife biologists consider the Bridled Titmouse safe now, but because of habitat loss and pesticides, the species is of possible long-term concern. (Birds of Dewey-Humboldt, Arizona. GarryRogers.com. Photo by Dominic Sherony.)

Cedar Waxwing (Bombycilla cedrorum) Cedar Waxwings are medium-sized with very smooth feathers. They have a crest that often droops over the back of the head. The wings are broad and pointed, like a starling’s. The short tail is square-tipped. These birds are uncommon in Dewey-Humboldt. Though they usually form large flocks, I’ve only seen two groups of three birds. Waxwings pick berries while perching in berry-laden shrubs or trees or while hovering in mid-air. A line of waxwings perched on a branch sometimes pass a berry from bill to bill, until one of them swallows it. They also cruise over water hunting insects, like abdominous swallows. Nest: Waxwings lay three to five pale gray to bluish gray finely speckled eggs in loose nests built in trees. Conservation: Wildlife biologists consider the Cedar Waxwing safe in some areas and vulnerable to extinction in others. (Birds of Dewey-Humboldt, Arizona. GarryRogers.com.)

Common Raven (Corvus corax) Ravens are smart. They create and use simple tools, they mimic human words, and they call one another to a newly discovered food source. Acrobatic fliers, Ravens can roll, somersault, and fly upside down. I’ve seen a video of a Raven using a large can lid as a sled, repeatedly carrying the lid in its beak to the ridge of a snowy roof, and sliding down to the eve fluttering its wings to say balanced. A friend with a Raven family pet told me that their mischief can be wearying. Wild Ravens have lived more than 22 years. Nest: Females do most of the work building the nest. They begin with large sticks and construct a base up to five feet across and two feet high. In a small interior cup, they lay three to seven green or blue mottled eggs. Conservation: Ravens adapt well to human impacts and may be one of the species that survives the sixth mass extinction. (Birds of Dewey-Humboldt, Arizona. GarryRogers.com. Photo: Peter Wallack)

Dark-eyed Junco (Junco hyemalis) Juncos do not migrate, but in the fall, they often drift out of their mountain homes down to nearby valleys. They are especially common in D-H during fall and winter months. These small songbirds have black to light-gray hoods. Males tend to be darker and grayer, females tend to be lighter and browner. All have white bellies and white outer tail feathers that form a flickering V shape when they fly. Juncos eat seeds, insects, and fruit. They prefer to eat on the ground, so sprinkle a few seeds for them when you fill the feeder. Wild birds can live more than 11 years. Nest: Juncos nest in forested mountains. They build their grass and twig nests on the ground and occasionally in a tree. Conservation: Though Juncos are still numerous, the American Breeding Bird Survey reports that Junco populations declined by about 50% from 1966 to 2015. (Birds of Dewey-Humboldt, Arizona. GarryRogers .com. Photo: Dave Menke) 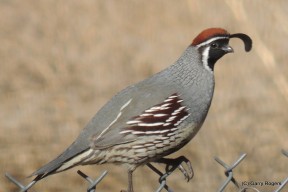 Gambel’s Quail (Callipepla gambelii) Gambel’s Quail live in D-H’s chaparral-covered hills. They form coveys of 12 or more birds that roost and nest in shrub thickets. Once, a family of mom, dad, and a line of seven chicks dashed across the road in front of my car. I stopped, and just as the last of the chicks made it to safety, another chick entered the road far behind the others. Dad popped onto road, ran back, and pecked the slowpoke’s fluffy bottom, speeding its dash to catch up. The first covey to move into my place near the center of town came in 2014. The birds roost in a woodpile I made with dead shrub and tree branches. Quail are too plump for standard feeder perches, so be sure to scatter a few seeds for them when you fill the feeder. Quail lives are short, usually less than 4 years. Nest: Grass and twigs on the ground in shrub thickets. Conservation: Gambel’s Quail numbers fluctuate along with winter rain and spring plant growth. As our global warming-imposed drought continues, the D-H quail population will shrink. (Birds of Dewey-Humboldt, Arizona. GarryRogers .com. Photo: GR)

Vermilion Flycatcher (Pyrocephalus rubinus) The flying insects this brilliant sky predator takes must be near-sighted and insensitive to color. Other flycatchers are of subdued color, but not this little fellow. Despite brilliant plumage, however, the male Vermilion Flycatcher is not overconfident. He courts his chosen mate by hovering and singing to her high in the air and by offering her butterflies and other brilliant insects. Nest: The birds build loose nests of grass and twigs in trees. The male brings food to the female while she incubates two to four white or creamy eggs with bold dark blotches and small lighter spots. . Conservation: Vermilion Flycatchers are declining in Arizona and other parts of their range due to human destruction of the moist habitats they prefer. The birds are still abundant at many sites and are not an immediate conservation concern. However, without our attention and care, they will continue to decline. (Birds of Dewey-Humboldt, Arizona. GarryRogers .com. Photo by Charles J. Sharp)

Click on a photo for larger image, caption, and photographer.