Local resident Ralph Cogdill checks the debris of his house which was ruined by a wildfire in Pigeon Forge, Tennessee on Nov. 30, 2016. Photograph: Xinhua / Barcroft Images

GR:  The “Establishment” supports fossil-fuel companies and denies climate change.  The incoming U. S. administration is populated by deniers.  The harm caused to wild plants, animals, natural systems, and human society is devastating.

“With my new hope that deniers of climate change will take ownership of the consequences, I am sad to report that this week, terrible wildfires have swept through Tennessee, a southeastern state in the USA. This state is beset by a tremendous drought, as seen by a recent US Drought Monitor map. There currently are severe, extreme, and exceptional drought conditions covering a wide swath of southern states. The causes of drought are combinations of lowered precipitation and higher temperatures. 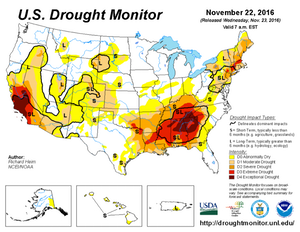 “The patterns of drought are the result of many weeks of weather (warm and dry) that have led to the current conditions. The recent high-temperature map from NOAA below provides just one example. 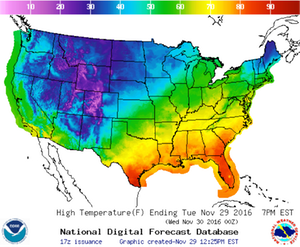 “Why do we care about the crazy drought in the southern USA? Because it leads to bad consequences. As I write this post, we can read about the horrific fires in Tennessee that are destroying both natural habitat as well as towns and economies. A video about Gatlinburg Tennessee fires can be seen here. There, wildfires are threatening the resort town. It is too early to tell what economic damages will result.

“Was this fire caused by climate change? The answer is yes. We are now in a world where all of our weather is impacted by humans. We know human-caused warming is making drought and heat more severe – that leads to fires like the one we are seeing. We also know that 2016 will be the hottest year ever recorded and the first time temperatures have reached the critical mark of 1C (1.8F) above normal.” –John Abraham (continue reading: Fires and drought cook Tennessee – a state represented by climate deniers)