During the long drought this spring, several mule deer visited Coldwater Farm near the Agua Fria River in central Arizona.  A lone doe became a resident, and browses in the yard in the evenings and mornings.  In early August I saw a fawn bouncing about beside the doe.  Yesterday, the fawn was racing about in the cow pasture while the doe watched.

There are no cows at the farm.  The cow pasture is fallow and covered by weeds taller than the fawn.  Getting good photographs is almost impossible.  In the picture below you can probably see the fawn’s spots, but not much else. 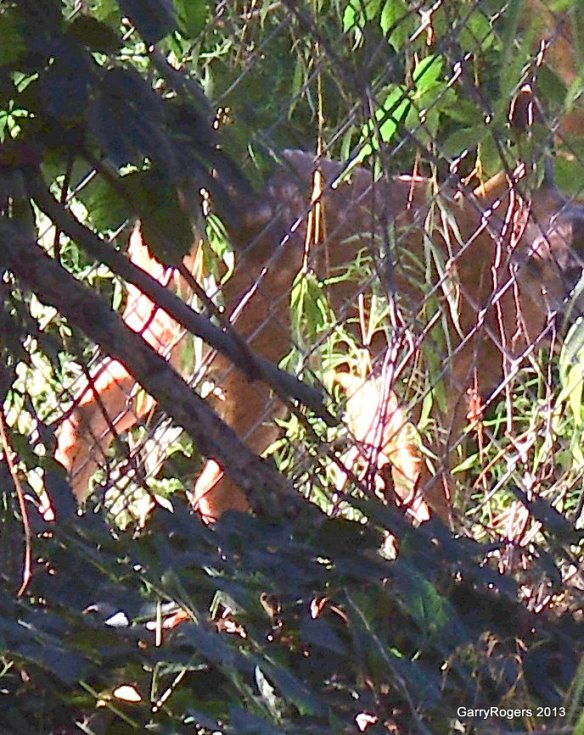 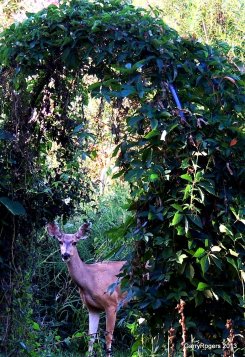 The Mule Deer doe has been much easier to photograph.

Over the past 15 years, deer have visited the farm only twice, and the visits lasted just one day.  There were always dogs in the past, and now that the last dog died, deer are free to roam about the farm, and so they do.

Deer are fond of domestic roses.  When we moved to the farm in 1997, I planted 175 hedge and climbing roses in hopes of attracting deer.  The previous visitors took a few rose leaves and hips, but now, at last, the roses are being seriously browsed.  The deer like other plants too, and seem to browse all the woody plants on the place.  They especially like grape leaves, but they also eat willow, plumb, desert hackberry, and mulberry.  They also to eat a variety of weeds.

None of the woody plants have been harmed.  Perhaps the local winter and spring droughts will get worse and the deer will begin damaging the plants.  The trees and grapes are too tall for the deer to reach a significant portion of the leaves, but they might strip the bark.  Before that was necessary, the human farm manager would do his job to save the plants, and bring in hay.

Click here for more about the mammals at Coldwater Farm.

Tell me about the mammals you see.

4 thoughts on “Mule Deer and Fawn at Coldwater Farm”