GR:  Love it! I would choose a Wolverine for its strength, stamina, ferocity, and intelligence. Sorry losers.

“It’s a little after 8 a.m. at Wakefield High School in Arlington, Va., and Michelle Harris’ AP Environmental Science class is getting right to it.

“All right, you guys got your brackets out?” Harris asks.

“The class of mostly juniors and seniors ruffle through folders and pull out pieces of paper with brackets — 64 slots, four quadrants, and one central box to predict the championship. But there’s something a little different about these brackets …

“We’re going to jump down to the fourth-seeded spider monkey against the 12th-seeded antelope squirrel,” Harris says.

“Spider monkey better win!” one student shouts from the back of the class.

“This is March Mammal Madness: Round 2. It’s a competition that has been playing out online and in hundreds of classrooms over the past month. Real animals wage fictional battles, while students use science — a lot of it — to try to predict the winner.

GR:  This interactive map shows counts of bears, bobcats, mountain lions, and wolves killed by the U. S. government’s Wildlife Service.  The legend is on the “Layers” drop-down menu.  Since more than a third of all U. S. mammals have disappeared over the past 50 years, and since more than half of the 400 mammal species in the U.S. are at risk of eventual extinction, it would seem that our wildlife management agency should choose nonlethal techniques.  They can’t however, because a mostly uninformed public does not want to pay the extra cost.  This same ignorance keeps us driving our polluting automobiles and powering our homes with coal and oil; it keeps Monsanto’s poisonous pesticides falling on our food and the food of our wildlife, and it keeps American-made bombs falling in other parts of the world.  Of course, the ignorance would quickly fade were it not for the greed-motivated deceptions of our “leaders.”

In 2013, 14 years after we moved here, the first deer visited and stayed to birth a fawn.  Twins were born in 2014, and one more in 2015.  They are all such welcome additions, that they receive a great deal of attention.  I haven’t yet photographed the occasional Antelope, Bat, or Cottontail Rabbit that visits the farm, but I will update this post when I do.  The friends–the dogs, cats, and three rescued cows–that spent long lives here will be the subjects of another post.

The footprint of a Raccoon who came in through the cat door, washed some cat food in the cat’s water bowl, ate, and left.

Raccoon who stays around the house.

Gophers are the principle food of the local Red Tailed Hawk family.

Discovery of this three-foot tall Woodrat (packrat) house in 2012 spurred an inventory of the farm which found 16 new (<six years old) houses.

Like other predators, Otters help control the numbers of their prey species. They happily take introduced alien species along with natives. In a few instances, people have complained that River Otters might be eating trout introduced to Arizona waters for sport fishing.

Otters often eat and sleep floating on their backs. In the picture, a mother is holding her big-nosed child on her stomach.

River Otters lived throughout Arizona. Unfortunately, their thick fur made them a favorite of 19th Century fur trappers. It takes 20 to 30 otters to make a fur coat. By 1900, most of the Otters were gone and the fur coats had worn out. During the 20th Century, water pollution and stream diversion for irrigation, flood control, and recreation eliminated most of the best habitat. Today there are few if any Otters left in the State. Ponds and pools along the Agua Fria River near my home in central Arizona might be  suitable for otters, but it is unlikely that any live here.

The State of Arizona Game and Fish Department conservation status ranking for otters and many other wildlife species is included in the species checklists on this website.

Returning Otters to Arizona would be difficult. Otters are sensitive to water pollution, and could not survive in many of the State’s streams and lakes. Moreover, the banks of irrigation canals and reservoirs aren’t suitable for Otter burrows. We can imagine that we might set aside one of our reservoirs for Otters. Stocked with native fish, protected from pollution and recreation, and planted with preferred vegetation, Otters brought to the reservoir from other locations might set up a colony and the species might once again live in Arizona.

The header image is from Animal Photos.

I am beginning a series of short articles about the state’s endangered species. For  species that the Department considers Critically Imperiled (S1), Imperiled (S2), or Vulnerable to Extinction (S3).  Please send me your comments and suggestions or bring them to a meeting. The inaugural meeting is at 10:00 am, August 15, 2015, at the Dewey-Humboldt Historical Society Museum on Main Street in Humboldt.

Australia’s Environment Minister Greg Hunt has pledged to end the extinction of native mammal species by 2020, with a focus on culprits such as feral cats.

GR:  Invasive species, including feral species, are the second greatest short-term reasons for extinction.  Even if we removed them all, extinctions would still occur.  Habitat loss to human development is the greatest short-term reason.  Development in the form of construction and resource harvest (agriculture, grazing, logging, and mining) is steadily eliminating the natural habitats required by native wildlife.

It makes sense to begin repairing our conservation efforts by controlling short-term reasons for extinction.  However, we must also control the long-term human impacts (climate change, toxic wastes, and more) if we seriously intend to stop extinction.

Ending wildlife extinctions in just six years will be difficult.  Growth and development have taken control of the Australian government, and these twin powers are not concerned with biodiversity.  Here’s a current illustration of the problem. 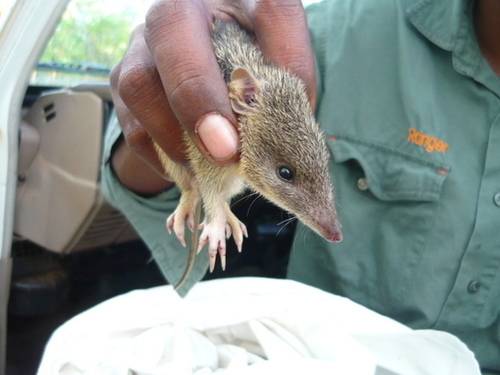 Twenty-nine Australian land mammals have become extinct over the last 200 years, and 56 are currently facing extinction. These losses and potential losses represent over a third of the 315 species present…

Believing that non-human consciousness exists is like believing the Earth orbits the Sun.

The Cambridge Declaration summarizes and affirms non-human consciousness by a group of respected scientists.  The Declaration clearly states that the neocortex, the thin layer of cells covering mature mammalian brains is unnecessary for consciousness.

In my novel Corr Syl the Warrior, I assumed that consciousness appeared among the first complex creatures 500 million years ago and evolved and expanded.  It probably did.  But I also assumed that the process would lead to intelligence similar to human intelligence.  I made this unimaginative assumption so that I could stage conversations between species.  We will probably discover that divergent paths of evolving intelligence will always limit interspecific communication.

The arguments contained in the Declaration are founded upon empirical evidence.  Of course, questions remain, and pseudo-scientific deniers are always with us.  Nevertheless, the Declaration gives us scientific justification for humane treatment of non-humans.  The Declaration follows as originally published.

END_OF_DOCUMENT_TOKEN_TO_BE_REPLACED

The animal fur opposition movement began in the 1800’s and surged in the U. S. in the 1970’s, becoming a major force during the 1980’s.  It is part of the broader animal rights movement that includes animal abuse and aspects of animal equity.  Some of the important events are included in the timeline on ask.com that was assembled by Doris Lin.  The current resurgence of fur use in the fashion industry is sparked by new personal wealth in China and elsewhere.  It shows how easy it is to awaken the human aptitude for horrifying atrocity.

The rest of this post has facts and graphic images from the Fur Out the Closet blog. END_OF_DOCUMENT_TOKEN_TO_BE_REPLACED

Base Layer for Notebook Cover

The second edition of my “Arizona Wildlife Notebook” will be off to the printer (CreateSpace) as soon as I finish the cover.  This edition has introductions and checklists for 12 groups of Arizona animal species:  Amphibians, ants, bats, birds, butterflies and moths, dragonflies and damselflies, fish, grasshoppers, lizards, mammals, snakes, and turtles.  Groups in bold type are new to the Notebook.  The introduction to each group covers the group’s conservation issues and provides references for printed and online field guides.  The checklist for each group includes scientific and common names and conservation status.  I alphabetized each checklist by scientific name, and I included an index for all the common names. END_OF_DOCUMENT_TOKEN_TO_BE_REPLACED

I have completed the second edition of the Arizona Wildlife Notebook!  The new Notebook has four more species groups than the first edition, and it has an expanded index.  The most important change is in the conservation status for each species.  This time, I standardized the information so that future changes will be easier to track. END_OF_DOCUMENT_TOKEN_TO_BE_REPLACED