Base Layer for Notebook Cover

The second edition of my “Arizona Wildlife Notebook” will be off to the printer (CreateSpace) as soon as I finish the cover.  This edition has introductions and checklists for 12 groups of Arizona animal species:  Amphibians, ants, bats, birds, butterflies and moths, dragonflies and damselflies, fish, grasshoppers, lizards, mammals, snakes, and turtles.  Groups in bold type are new to the Notebook.  The introduction to each group covers the group’s conservation issues and provides references for printed and online field guides.  The checklist for each group includes scientific and common names and conservation status.  I alphabetized each checklist by scientific name, and I included an index for all the common names. END_OF_DOCUMENT_TOKEN_TO_BE_REPLACED

I have completed the second edition of the Arizona Wildlife Notebook!  The new Notebook has four more species groups than the first edition, and it has an expanded index.  The most important change is in the conservation status for each species.  This time, I standardized the information so that future changes will be easier to track. END_OF_DOCUMENT_TOKEN_TO_BE_REPLACED

More than half of the lizard species found in the U. S. are present in Arizona.  They are a colorful group with fascinating life histories.  Lizards help control ants, termites, and other insects, and with only one exception, the Gila Monster, they are not venomous.  Field guides are available online (Arizona Herpetological Association, Brennan, 2008), and in print (Jones and Lovich, 2009, and Stebbins, 1966). 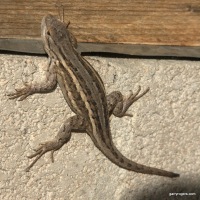 The photograph shows a Plateau Fence Lizard.  These lizards do like fences, but they will sit on any convenient object that gives them an elevated view.  They are found throughout central and northern Arizona.

Lizards are not descended from dinosaurs.  They appeared about the same time and lived with dinosaurs, but they are not closely related.  Lizard legs extend to the sides of the body rather than projecting downward or forward.  Lizards became a separate group in the Late Triassic, over 200 million years ago. END_OF_DOCUMENT_TOKEN_TO_BE_REPLACED

This notebook has complete checklists for the amphibians, birds, fish, mammals, lizards, snakes, and turtles that live in Arizona. A brief introduction to each checklist provides references to field guides and notes on conservation. Symbols in the lists show the conservation status of all Arizona species as of July 1, 2012.