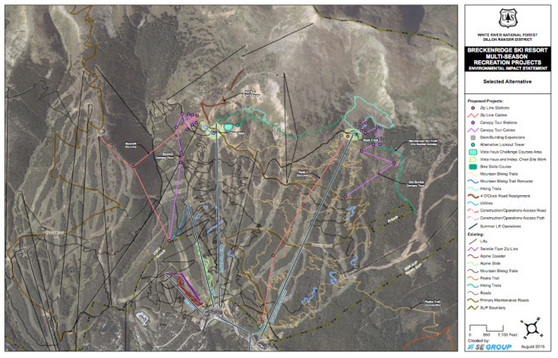 FRISCO — The U.S. Forest Service is on track to approve a huge expansion of summer activities at Breckenridge Ski Area that will accommodate up to 150,000 additional visitors during the summer season.

The agency this week released a final environmental study for the new installations and programs, along with a draft decision letter from White River National Forest Supervisor Scott Fitzwilliams, who said he thinks the new facilities — including zip lines, canopy tours and challenge courses — will enhance public appreciation of national forest lands and the outdoors.

The proposal was controversial in Breckenridge, as some residents expressed concerns about drawing more visitors to the already crowded town. Other locals support the plan as a way of increasing tourism revenues and drumming up more business for local restaurants and shops.  Sourced through Scoop.it from: summitcountyvoice.com

GR:  At all costs, people first!  Sad that a national land-management agency would not see the need to preserve nature now that more than half of all animals on Earth age gone primarily because of habitat loss.