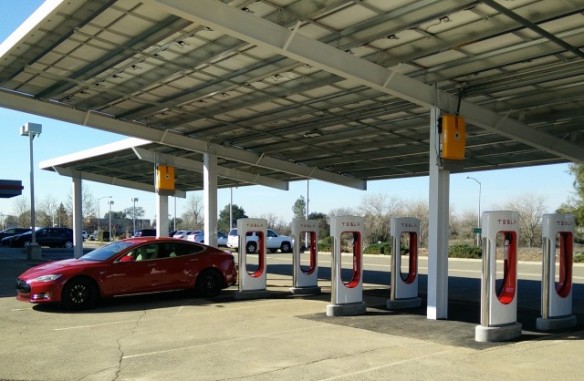 (Photo:  A Tesla Model S recharges its battery at a solar powered electrical station. A combination that provides a clear path out of a transportation-based hothouse gas emissions trap. Enabled by this technology, a number of countries are considering a complete ban on fossil fuel use for vehicle transport from 2025 through 2030. Image source: Green Car Reports.)

New national policy proposals from the four ruling parties of Norway spurred a flurry of headlines this week as leaders explored the possibility of banning all fossil fuel based vehicle sales by 2025.

The country, which already has a 24 percent national all-electric vehicle sales rate — is pursuing ways to ensure that number grows to 100 percent in very short order. Note that these vehicles are of the all-electric, battery-driven variety and do not include hybrids or plug in hybrids like the Chevy Volt.

Leaders from both parties within Norway were considering the ban which, if enacted, would dramatically reduce Norway’s vehicle fleet carbon emissions. Fully 90 percent of Norway’s electricity is generated by renewable hydro-electric power. And hooking vehicles up to this energy source would push their use and chain of fuel emissions to zero.  More: Norway, India and Netherlands May Ban Fossil Fuel Driven Vehicles by 2025-2030 | robertscribbler