GR:  The term environment refers to human surroundings. We measure human impact on the environment by the level of pollution of the air, water, and land, and the losses of food, water, and the convenience resources, the fossil fuels, lumber, and concrete.  Human impacts are often quite striking as illustrated below.

Here’s a link to more illustrations and discussions of our impacts.

As global warming progresses and weather extremes become stronger and more frequent, the massive human population’s overuse of other animal species and the soils and plants they need for survival will produce deforestation, extinction, and desertification. Consequent human starvation will prompt conflict, death, and mass emigration. As predicted 50 years ago, the end has begun. Like locusts, the humans have fed and now they are dying or moving on.

Sound too doomy and gloomy? Perhaps, but before we ignore the predictions and the current early symptoms of impending collapse, we should look at the earlier models and recent discussions (e.g., Diamond below).

It is always prudent to expect the best and plan for the worst.  Jared Diamond gives a helpful discussion of this in the final chapter of his book Collapse. At the end, Diamond discusses three reasons for hope—hope we can avoid collapse.

Diamond’s first reason for hope is that “. . . realistically, we are not beset by insoluble problems” (521). His second reason “. . . is the increasing diffusion of environmental thinking among the public around the world. Diamond then discusses the crucial choices environmental thinking forces us to make if we are to succeed and not fail. The first is “the courage to practice long-term thinking and to make courageous, anticipatory decisions at a time when problems have become perceptible but before they have reached crisis proportions” (522). The second choice “involves the courage to make painful decisions about values” (523). Treasured values–religious, cultural, and traditional views and practices–are great dangers when they prevent societies from changing to meet new challenges.

Diamond’s third reason for hope is the work of archaeologists and the modern global communications network that let us learn from the mistakes of past peoples and of distant peoples. “My hope in writing this book has been that enough people will choose to profit from that opportunity to make a difference” (Diamond, 2005: 526).

In the 10 years since Diamond published Collapse, there doesn’t seem to have been much progress on the reasons for hope. Yes, population growth, global warming, etc. are soluble problems, but the hour grows late, and the problems continue to grow. Likewise, we have global diffusion of information across the Internet, but governments, politicians, and dictators are succeeding at containing the actions prompted by increased awareness. Are we learning from the mistakes of the past and present? Sure, we are, but now time is of the essence as they say, and we are running out of it.

You might want to read the later edition of Collapse and Diamond’s thoughts on events during the 10 years since first publication. 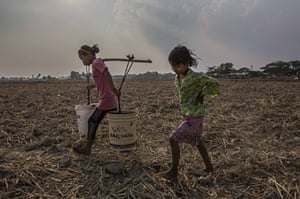 Here is a well-illustrated discussion of World Environment Day from the Guardian:  “More than a quarter of a billion people, half of them children, are suffering the impact of severe drought across three continents. Aid agencies are working to deliver emergency food parcels to prevent people starving, and to help build livelihood resilience to extreme weather events . . . .”  Source: World Environment Day: drought drives global rise in hunger – in pictures | Global development | The Guardian