My latest for Takepart.

Everybody has some dreadful bit of family history stashed away in the attic and preferably forgotten. For the Rockefeller heirs last week, it was their investment in the fossil fuel industry, largely founded by their oil baron ancestor John D. Rockefeller. For me, it was an ocelot jacket inherited from my wife’s grandmother.

And let me tell you, it is hard to write about endangered species when you have a dead one literally hanging over your head. Or more like 15 dead ocelots, to make up the single carcoat-length jacket that has been hidden away in my attic for several decades now. So I decided to get rid of it, more or less the way the Rockefellers decided last week to divest their millions from fossil fuel companies. Only on a somewhat more modest scale.

Ocelots are beautiful little cats, roughly twice the size of…

Animals imprisoned for human entertainment is disrespectful, and it is cruel. If we help them live their natural lives, we benefit ecosystems and ourselves.

Leadership from Outside Government

“James and Suzy Amis Cameron, the provocative power couple behind the first all-vegan school and co 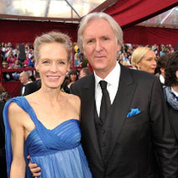 untless successful films, are now reported by CNN to be promoting a plant-based diet as the cure for our environmental ills.

“The two tout the benefits of a vegan diet as far less wasteful than the standard, meat-heavy American diet. Additionally, they say, plant-based eating contributes significantly less to the greenhouse gas emissions that are wreaking environmental havoc.

“As Cameron explains: “Sixty percent or more of the crops we grow go to feed animals, which is very, very inefficient.” He has hope for positive change, however, confidently asserting that if enough people adopted a plant-based diet, we could “turn down the heat on this planet very quickly.”

GR:  This is a good example of leadership from outside government.  It would be great if the couple promoted family planning as well.

Image from Exposing the Big Game

“No tiger cub deserves to be born into a life of suffering and eventually be killed for its fur, and other parts used for “chinese magic” or bogus potions.

“China is allowing the sale of captive-bred tiger skins and body parts. They are denying a UN agreement which calls for such trade to be banned. The conditions in these farms are horrible!Images appeared on in our mailbox showing deceased tigers from these camps. Our staff was shocked but decided to publish them. Warning, these images are not for the weak-hearted.

“Something needs to be done! There are just 3200 wild tigers living in the wild and over 5000 held captive in these tiger farms! These creatures deserve a worthy life and we want to give it to them. If we move as one, we can make a change! ”

GR:  During the past century we lost 97% of all wild tigers. Habitat loss and hunting eliminated 97,000 of the 100,000 tigers we had a century ago.  At this rate, all tigers living in the wild will be extinct in 10 years! Please sign the petition.