There are many reasons this is a bad idea. Encouraging the salvage and planting of native plants can help save water and ensure more resiliency in the vegetation. Some non-native plants contribute to public health problems, such as severe allergies. Limiting these plants is an important goal of local communities. Further, it is critical that non-native invasive plants be limited as these can cause harm to neighbors’ private property and to our parks and wildlands, plus harm agriculture, wildlife, and more by spreading to create unnatural fire conditions and out competing native plants.

Please modify and send the message below and ask your representatives to oppose this ill-conceived bill to limit local communities’ ability to protect native plants. . . . Source: secure.sierraclub.org

GR:  Ignoring the effects of a development would make it cheaper to destroy native habitats. Of course, developers want that.  I doubt the savings would amount to much for individuals that use the developments, but the cost in natural vegetation and wildlife will be a lasting expense that we will all feel.

“It’s the Goldilocks principle. All species, including plants, animals and fungi, are uniquely adapted to a specific combination of climate and environmental conditions that they need to grow, reproduce and thrive – things need to be “just right.  If the environment changes, species have two choices: they can either stay where they are and adapt to the new conditions, or they can move to more suitable places.

“Plants, being rooted to the earth, have a limited ability to respond to environmental change. It can take a long time to adapt to new conditions, so it’s difficult for plants to respond quickly to relatively rapid changes that happen around them, like those projected in some climate models. Plants can’t pick up and move either; they can only send forth their seeds in hopes of finding the Goldilocks conditions perfect for growth and reproduction. For many plant species, this dispersal will likely not happen far enough or fast enough to keep pace with projected changes in climate, which means they are at risk of being left behind. This is especially true in today’s increasingly fragmented landscapes” (Source: www.natureconservancy.ca).

GR:  I think we need a national commitment to learn how to help plants migrate to new locations. Both the value and the variability of microclimate, soil, topography, and biological interaction are limiting factors for plants. Along a route over a mountain or across a valley, the abundance of each species will change along with the changing factors. Repeat the measurements next year and there will be differences. Storms, invasive species, human activity, and even evolution can alter conditions. We will need an army of observers at work for years to succeed. If we were wiser, we would be studying nature instead of fighting wars and bailing out big banks.  We must applaud Alberta Biodiversity Monitoring Institute’s efforts. Perhaps they can save a few species.

The eastern quoll is now extinct on the Australian mainland and declining in Tasmania. If we cannot save an animal as cute and charismatic as this, what hope is there for the “ugly” and “boring” species?

Today, 26th January, is Australia Day. This is Australia’s national holiday, marking the arrival on this day in 1788 of the British First Fleet at Port Jackson in New South Wales. Of course one might wonder whether the anniversary of the proclamation of British sovereignty over eastern Australia is an appropriate date to celebrate Australian unity and culture. No one can deny that indigenous Australian communities have suffered – and are still suffering – extreme hardships following the establishment of British rule on this continent, and 26th January has other names: “Invasion Day”, “Survival Day”, “Day of Mourning”… This topic is not my field of expertise so I won’t expand further, but I encourage you to learn more about different perspectives here, here, here, here, here, here and here.

What I do want to write about today is biodiversity and conservation in Australia, and the status of Australian wildlife in…

Here’s a quote from Aldo Leopold that relates to the article below: “One basic weakness in a conservation system based wholly on economic motives is that most members of the land community [and ocean community] have no economic value. Wildflowers and songbirds are examples. Of the 22,000 higher plants and animals native to Wisconsin, it is doubtful whether more than 5 per cent can be sold, fed, eaten, or otherwise put to economic use. Yet these creatures are members of the biotic community, and if (as I believe) its stability depends on its integrity, they are entitled to continuance” (Leopold, A. 1949. A Sand County Almanac….

This article contains no useful information. Zero. Nada. Nothing. If usefulness is your criterion for reading, thank you very much for your time and goodbye, we have nothing more to say. The truth is that I am bored to tears by usefulness. I am bored, more precisely, of pretending usefulness is the thing that really matters.

I mostly write about wildlife. So here is how it typically happens for me: A study comes out indicating that species x, y and z are in imminent danger of extinction, or that some major bioregion of the planet is being sucked down into the abyss. And it’s my job to convince people that they should care, even as they are racing to catch the 7:10 train, or wondering if they’ll be able to pay this month’s (or last month’s) rent.

Caterpillars on a Grape Leaf

“Previous research has investigated how plants respond to acoustic energy, including music,” said Heidi Appel, senior research scientist in the Division of Plant Sciences in the College of Agriculture, Food and Natural Resources and the Bond Life Sciences Center at MU. “However, our work is the first example of how plants respond to an ecologically relevant vibration. We found that feeding vibrations signal changes in the plant cells’ metabolism, creating more defensive chemicals that can repel attacks from caterpillars.”Appel collaborated with Rex Cocroft, professor in the Division of Biological Sciences at MU. In the study, caterpillars were placed on Arabidopsis, a small flowering plant related to cabbage and mustard. Using a laser and a tiny piece of reflective material on the leaf of the plant, Cocroft was able to measure the movement of the leaf in response to the chewing caterpillar.

GR:  Plants don’t share many of the traits we think of as intelligence.  Like animals, however, they can act to defend against injury. They can move their leaves and stems, and they can produce repellant chemicals.

Scientists usually view plants as static forms that build defenses as natural selection acts on reproductive success.  The traits associated with plant growth, reproduction, and dispersal are sometimes called strategies, but not in the sense that foresight and planning are involved. Considering the limited sentience plants exhibit, this seems appropriate.  Still, it would be interesting to devise an IQ test for plants.  We could find out which ones are the most sagacious. 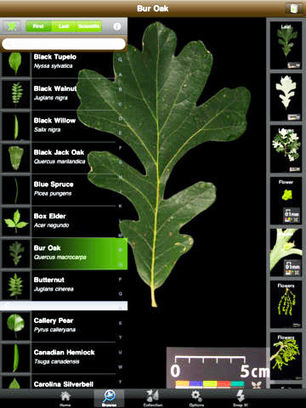 Leafsnap is the first in a series of electronic field guides being developed by researchers from Columbia University, the University of Maryland, and the Smithsonian Institution. This free mobile app uses visual recognition software to help identify tree species from photographs of their leaves.

Welcome to the February 2014 Berry Go Round Blog Carnival

Plants often appear passive, but even a massive redwood began life down there in the duff scrambling for scarce resources.  Fully grown, the trees must still defend against parasites and diseases.  Many plants are aggressive predators and invaders, and all plants have traits that improve their chances for survival and reproduction.  This month’s blog carnival posts offer examples.  Go here for previous carnivals. END_OF_DOCUMENT_TOKEN_TO_BE_REPLACED