GR: Our grandchildren will probably see the last of the wild apes, elephants, giraffes, lions, and tigers. We humans are eliminating Earth’s wild animals. Though some of us might feel remorse, most of us are more concerned with our daily routine: struggling to acquire wealth, satisfying desires, interacting with family and friends, and shopping at Amazon and Walmart (our leaders are like the rest of us except they wouldn’t be caught dead in Walmart). Last week there was a teacup storm over the raw truth of climate change. The true disaster is the careless and relentless destruction of nature in which human-caused climate change joins farming, fishing, hunting, dumping, and urbanization as an instrument of nature’s destruction. Can anything stop the human juggernaut’s inexorable destruction of nature? It appears that, like an avalanche, it will continue until all human potential is gone. Sad.

“The world’s last remaining tigers are living under severe threat of extinction, having lost 93 percent of their historical range and suffered a population crash of 95 percent during the past century.

“The major threat to their continued existence on Earth is poaching to meet the high demand in Asia for their parts and derivatives.

“This demand is exacerbated by the legal trade in lion bone, so it was with dismay that the Environmental Investigation Agency witnessed the Convention on International Trade in Endangered Species (CITES) 17th Conference of the Parties last year decide to allow South Africa to export up to 800 lion skeletons a year—as long as the lions were sourced from captive breeding facilities in South Africa.

“Rare animals are widely used in traditional Chinese medicine for supposed health benefits, and are also consumed as a mark of status.”

GR:  New laws place poached animals off limits, but only if the buyer knows the animal was poached.

“Profits for endangered species and their body parts are sky-high. Ivory can go for $1,000 a pound on the streets of Beijing, and the pangolin — an anteater whose scales are used to disperse blood stasis and promote pus discharge, and whose meat is considered a delicacy — can fetch up to $324 a dish at local restaurants. A report published in March noted that the pangolin is the world’s most heavily trafficked endangered animal.”

GR:  Today is International Tiger Day (http://bit.ly/WZDSsv).  Please sign the WWF petition for regulation of captive tigers in the U.S.  And remember to sign the AVAAZ petition to close Chinese tiger farms (http://bit.ly/1nLlPRY). 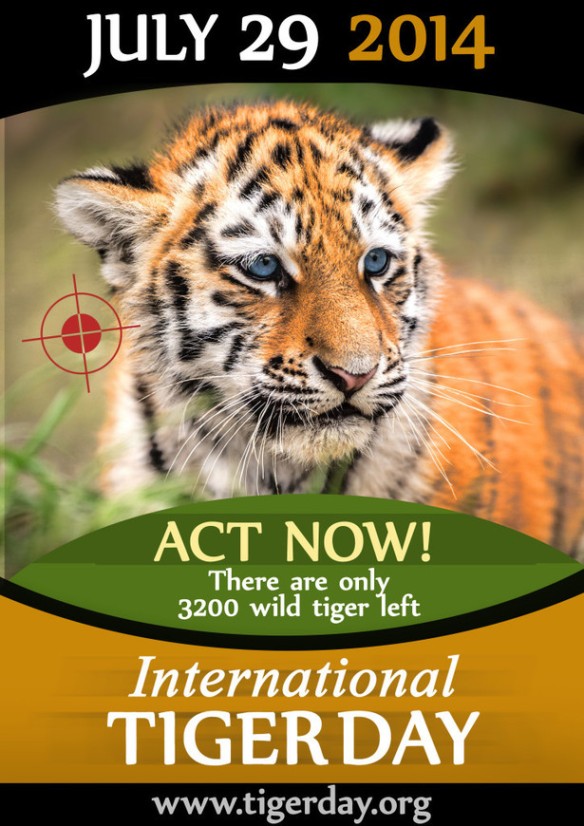 GR:  During the past century, we lost 97% of all wild tigers. Habitat loss and hunting eliminated 97,000 of the 100,000 tigers we had a century ago.  At this rate, all tigers living in the wild will be extinct in 10 years! Celebrate International Tiger Day and encourage others to join in.

FROM a Colombian rebel group that controls a tungsten mine to armed African groups that sell ivory, organised environmental crime is outpacing the ability of law enforcement agencies to control it, according to the Geneva-based Global Initiative a…gainst Transnational Organised Crime (Gitoc).

The reason: The impunity of so-called “kingpins” of crimes ranging from illegal wildlife trade – alone worth around US$19 billion (S$23.7 billion) a year – and illegal fishing estimated at US$23 billion, to logging and the trade of toxic waste.

Wildlife and Forest Crimes can be better understood in their complexity and disastrous effects through stories and case studies.

Wildleaks gives whistleblowers and witnesses of wildlife crime a secure place to report their evidence.